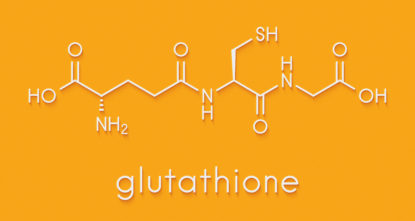 Glutathione seems to be one of the buzz words in the natural health industry, especially the cosmetic industry.  You may have heard from others that glutathione can be used for skin whitening but what exactly is this substance? Does it actually work to whiten or brighten the skin and your complexion?  Continue reading for more on glutathione other than what was mentioned previously with respect to allergies.

Glutathione aids in skin whitening or reducing pigmentation via two ways: First, it is said to influence and inhibit tyrosinase enzyme activity through its antioxidant mechanisms of quenching free radicals and peroxides (1), and, binding to the enzyme directly (1). The inhibition of tyrosinase leads to more phaeomelanin (lighter “red/brown” pigment) production over eumelanin (darker “black/brown” pigment) production (1). Secondly, Cysteine is required to form phaeomelanin so high levels of cysteine can promote this form over eumelanin. Glutathione is a supplier of cysteine. Sonthalia et al (2018) in their article mention a few studies where the benefit of glutathione was seen in lightening the skin but also some studies where it wasn’t seen, so at this time, there remains insufficient evidence to fully embrace or discredit the use of glutathione orally or intravenously for skin whitening.  Some of the studies mentioned by Sonthalia et al (2018) did have poor study designs as well.

As mentioned, glutathione is a major antioxidant in the body. This is where its power lies! It has more protective effects on the body than just help to prevent against hyperpigmentation of the skin.  It aids to protect our cells and tissues against oxidative stress via its quenching of free radicals and peroxides as oxidative stress can contribute to chronic diseases.  It also supports our liver detoxification pathways.

The molecule is a thiol tripeptide molecule (contains sulfur) made up of three amino acids cysteine, glutamate, and glycine (2) and can be synthesized in the body.  It can also regenerate itself in our body if it is used up as long as we have sufficient vitamin B2 to aid in the recycling of oxidized to reduced glutathione. An increased amount of oxidative stress on the body, however, can lead to glutathione depletion and supplemental glutathione may be needed.  Oxidative stress can be in the form of chronic inflammation, toxic chemicals, environmental pollutants. Multiple medications and substances that need to be detoxified by our liver using the glutathione pathway such as acetaminophen (Tylenol), alcohol, and excess estrogen can deplete glutathione stores as well.

Prolonged physical exercise also decreases total and plasma glutathione levels over time which has shown to play a role in the reduction of aerobic muscular metabolism and an increase in muscle fatigue (2).  A small study done on humans demonstrated that 1g of glutathione per day for 2 weeks helped to improve aerobic metabolism in skeletal muscles which reduces exercise-induced muscle fatigue due to decreasing lactic acid accumulation, decreased plasma fatty acids and elevating the concentration of mitochondria in skeletal muscle. (2)  This is considering there are no other abnormalities that can contribute to impaired mitochondrial function.

If you find you are sensitive to electromagnetic frequencies (EMF) or have a WIFI sensitivity, you may benefit from glutathione (3).

Glutathione can be given orally or intravenously.  There are also precursors to glutathione that one can take rather than glutathione itself which are cheaper but depending on the specific person, it may be of better interest to supplement with glutathione directly.

Intravenous glutathione mitigates the first pass effect, bypasses the gut and is delivered straight into the blood.  This is a great option for those with absorption problems or find they don’t tolerate sulfur well – for example, those with certain types of small intestinal bacterial overgrowth may feel worse with sulfur foods/supplements as it feeds certain bacteria (3).

Orally, the two best forms are N-acetyl glutathione and liposomal glutathione – the former isn’t destroyed by stomach acid (3).  Taking glutathione orally can also be beneficial in between intravenous treatments to have a more frequent intake of glutathione to help raise red blood cell glutathione levels.

Please note it is best to consult a licensed health care practitioner such as a naturopathic doctor to determine the best form and dosage for you as some people (in addition to those with bacterial overgrowth) can be sensitive to it.  Some side effects of glutathione administration include headaches, insomnia, hyperactivity, anxiety, irritability, and itchy skin (3).  This can happen in people that are sensitive to sulfites or in those that are sensitive to MSG but working with a naturopathic doctor, can help to minimize these symptoms.  Whichever the method of administration, the glutathione to take should be in its reduced form.

Curious if you could benefit from the antioxidant abilities of glutathione for your skin, your health condition(s), chronic illnesses, liver detoxification, or for your sports performance?

2 Thoughts on “Glutathione: The Benefits Beyond Skin Brightening”